The Impact of Childhood Anxiety on Primary Schooling 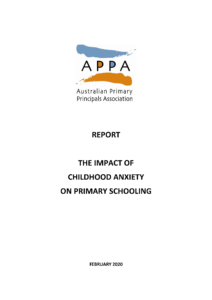 The Impact of Childhood Anxiety on Primary Schooling (2020)

The results of this survey were collated into a report, called The Impact of Childhood Anxiety on Primary Schooling.

This report is a significant insight into the challenges facing Australian Primary principals and many Australian families.

APPA would like to thank the project initiators, Michael Nuttall and Michael Hawton, for their work in preparing and facilitating the survey, together with Rob Steventon for his dedication to the analysis and reporting of the results.

The report can be found at APPA PROJECT – Childhood Anxiety – FINAL REPORT – Feb 2020.

Principal Health and Wellbeing - Back to Balance 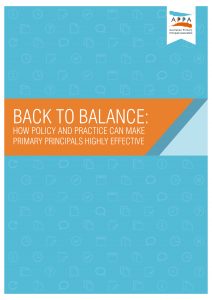 Principal Health and Wellbeing – Back to Balance (2017)

There is growing concern about the wellbeing of Australia’s primary school principals. In response to this, the Australian Primary Principals Association conducted a national survey to investigate the relationship between policy, practice, and principal health.

The results of this survey were collated into a report, called Back to Balance: How Policy and Practice Can Make Primary Principals Highly Effective. It is a significant insight into the problems facing Australian principals, and the policy and practice resources that could improve this situation.

The report can be found at Back To Balance.

APPA would like to thank the project leader, Norm Hart, for his hard work on this survey and dedication to the broader issue of principal health and well-being. We would also like to thank Dr Philip Riley for his support and guidance. Finally, the design and publication of this Report would not have been possible without the expertise of Camp Australia. We thank Camp Australia for their contribution.

At the 2017 APPA Conference, a Forum was held to discuss the outcomes of the survey and to develop a APPA – National Statement on Principal Health and Wellbeing This is a significant statement and one that individual principals and their associations can bring to discussions. 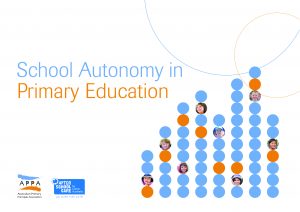 The School Autonomy Survey is a project of the Australian Primary Principals Association (APPA).

School leaders responding to the survey were also asked to evaluate the readiness of their students for secondary school as a measure of student outcomes. Such ‘readiness’ was seen in terms of academic, social, emotional and organisational readiness. 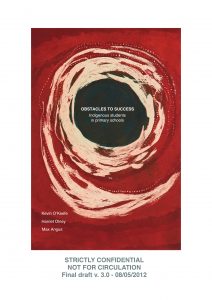 This report is the result of the research sponsored by the Australian Primary Principals Association (APPA) investigating issues at play in the nation’s primary schools.

It focuses specifically on the challenges faced by schools providing an education for Australia’s most disadvantaged students, its indigenous children.

View the Obstacles to Success report.

Targeting support for high-need students in primary schools: Report of the TRIPS study 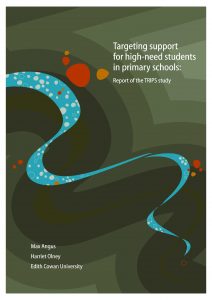 Targeting support for high-need students in primary schools: Report of the TRIPS study (2011)

The report examines the allocation of money which flowed to primary schools from the more than $2 billion COAG National Partnership funding to improve educational outcomes for students, particularly those who need it most. The study involved schools from government and non-government systems in Victoria, South Australia and Western Australia and was prepared by Professor Max Angus and Harriet Olney from Edith Cowan University for APPA and was funded by the Department of Education, Employment and Workplace Relations (DEEWR). 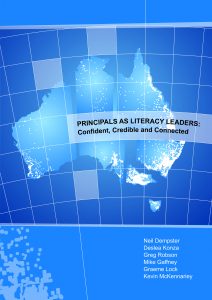 APPA’s research report Principals as Literacy Leaders: Confident, Credible and Connected was the result of a project initiated by APPA, which involved some 60 low SES Government, Catholic and Independent schools from the Northern Territory, South Australia, Western Australia and Queensland.

Funded by the Australian Government, the project set out to identify specific capabilities needed for principals to be effective leaders in the teaching of reading in their schools.

Clear was the fact that there is no turnaround in the achievement trajectory of students without the action of dedicated and talented principals. The evidence further showed that, while principals were able to resource improvement strategies for most children, the limited available resources could not always be stretched to meet the immediate needs of those who most require intervention.

The challenge now is for government and systems to invest sufficiently in leadership development. 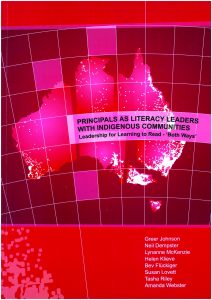 PALL was a joint venture with three universities; Australian Catholic University, Edith Cowan University and Griffith University. Each of the universities contributed to the development of five modules as part of a professional development program for principals. 60 principals participated in the program from three states (South Australia, Western Australia and Queensland) and one territory (Northern Territory) with 15 principals involved from all sectors in each of these states and territory. All were in low SES schools. In between the training activity, principals were supported by Literacy Achievement Advisors who were highly experienced, retired principals.

PALLIC ran from July 2011 to December 2012 under the direction of Griffith University in Queensland, the Northern Territory and South Australia across 46 nominated school sites with medium to high Indigenous student enrolments. The schools’ 46 Principals and their Indigenous Leadership Partners (ILPs) (and then in the latter stages others from the school community called ‘Learning Catalysts’), will work with 6 Literacy Leadership Mentors (LLMs), who are mid-career practising principals on secondment from their respective jurisdictions. The allocation of LLMs is: 1 in NT, 2 in SA and 2.4 in Qld who have been allocated caseloads from 3 schools up to 13 schools each.

While the learning framework, training modules and level and type of support are modelled around PALL, the significant differences with PALLIC are that it concentrates on three major reform areas:

Griffith University will also undertake research that gathers evidence to understand the factors that contribute to improved Standard Australian English (SAE) literacy in different Indigenous community environments, including parent partnerships, in order to use the findings to inform future project up scaling in comparable school communities.

The PALLIC project objective was to develop the literacy and leadership capabilities of school and community leadership teams and thereby improve SAE literacy outcomes for Indigenous students in partnership with their families. In a nut shell, PALLIC is about Principals and their Indigenous Leadership Partners coupled with their school’s Learning Catalysts working together with support from Literacy Leadership Mentors to make a difference to the teaching of reading in their schools.

PALLIC funding is managed by APPA and the project’s direction by a Management Committee made up of representatives from APPA, State and Territory Education and Griffith University. Also proposed, is a smaller National Steering Committee made up from some of the above representatives. As well, each state will have their own small management group. The PALLIC facilitators are from Griffith University: Professor Neil Dempster, Professor Greer Johnson, Dr Amanda Webster and Adjunct Professor Jan Robertson. 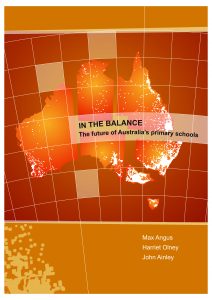 View the In the Balance report. 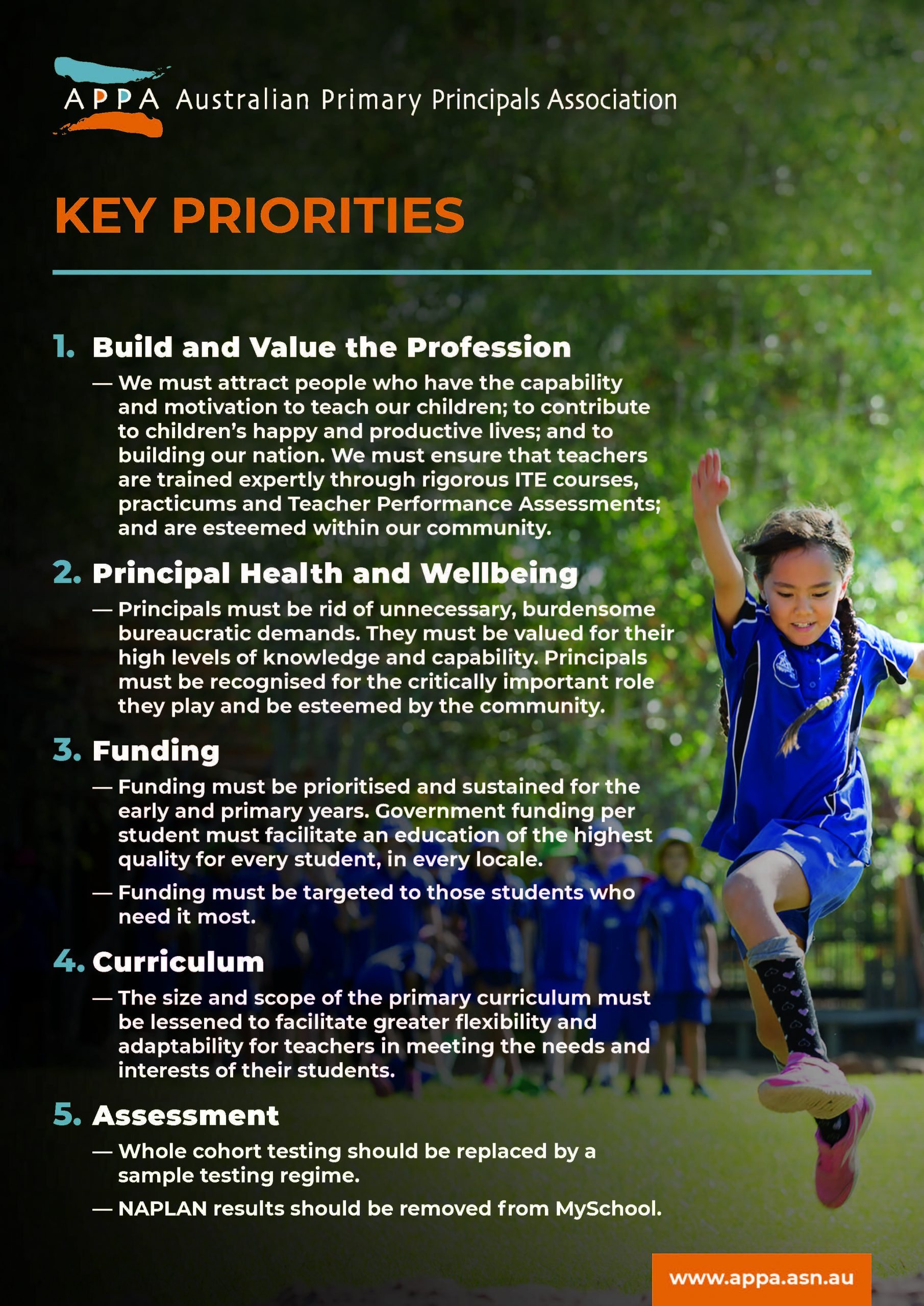 A summary of key priorities from Primary School Principals across the country. 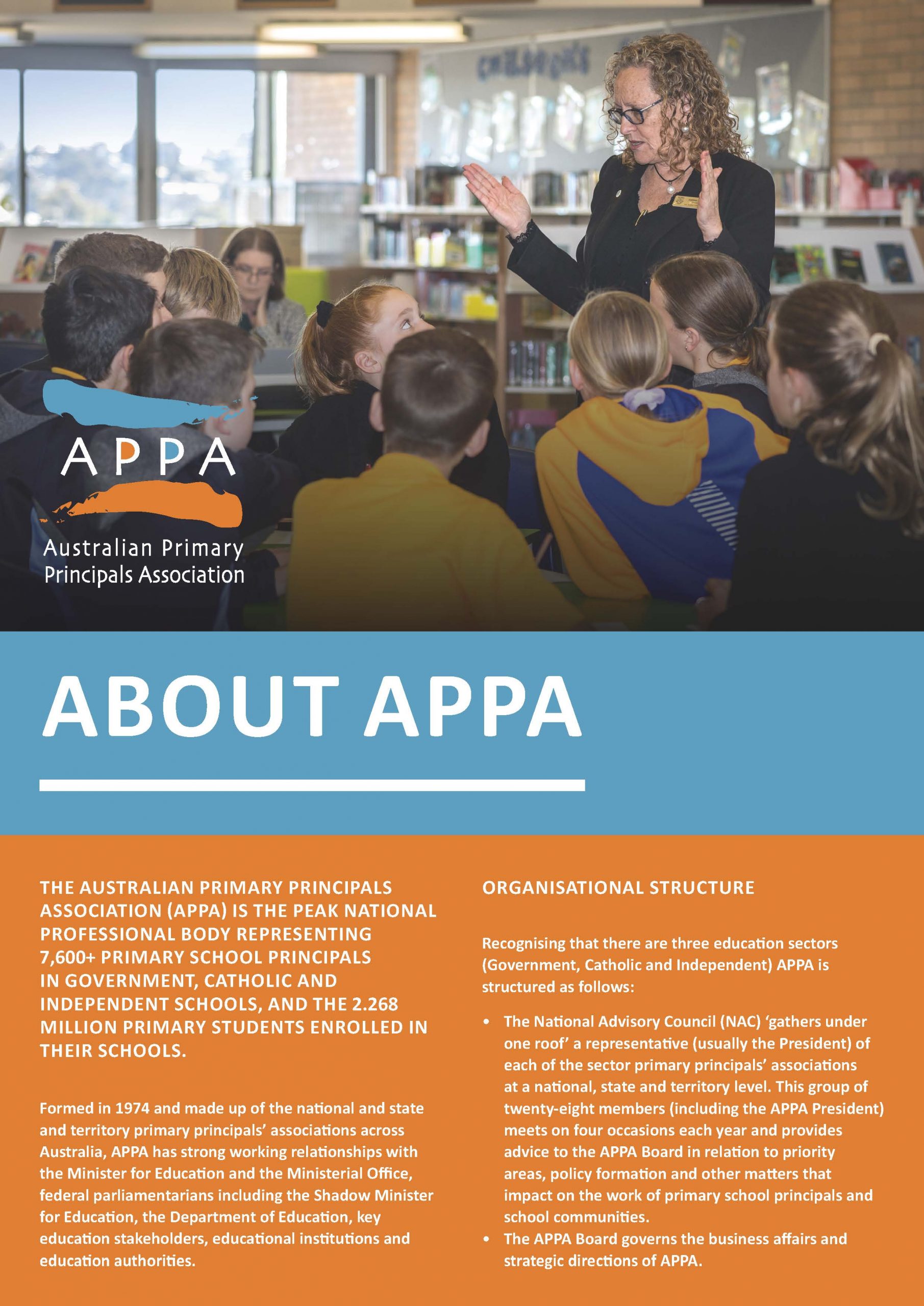 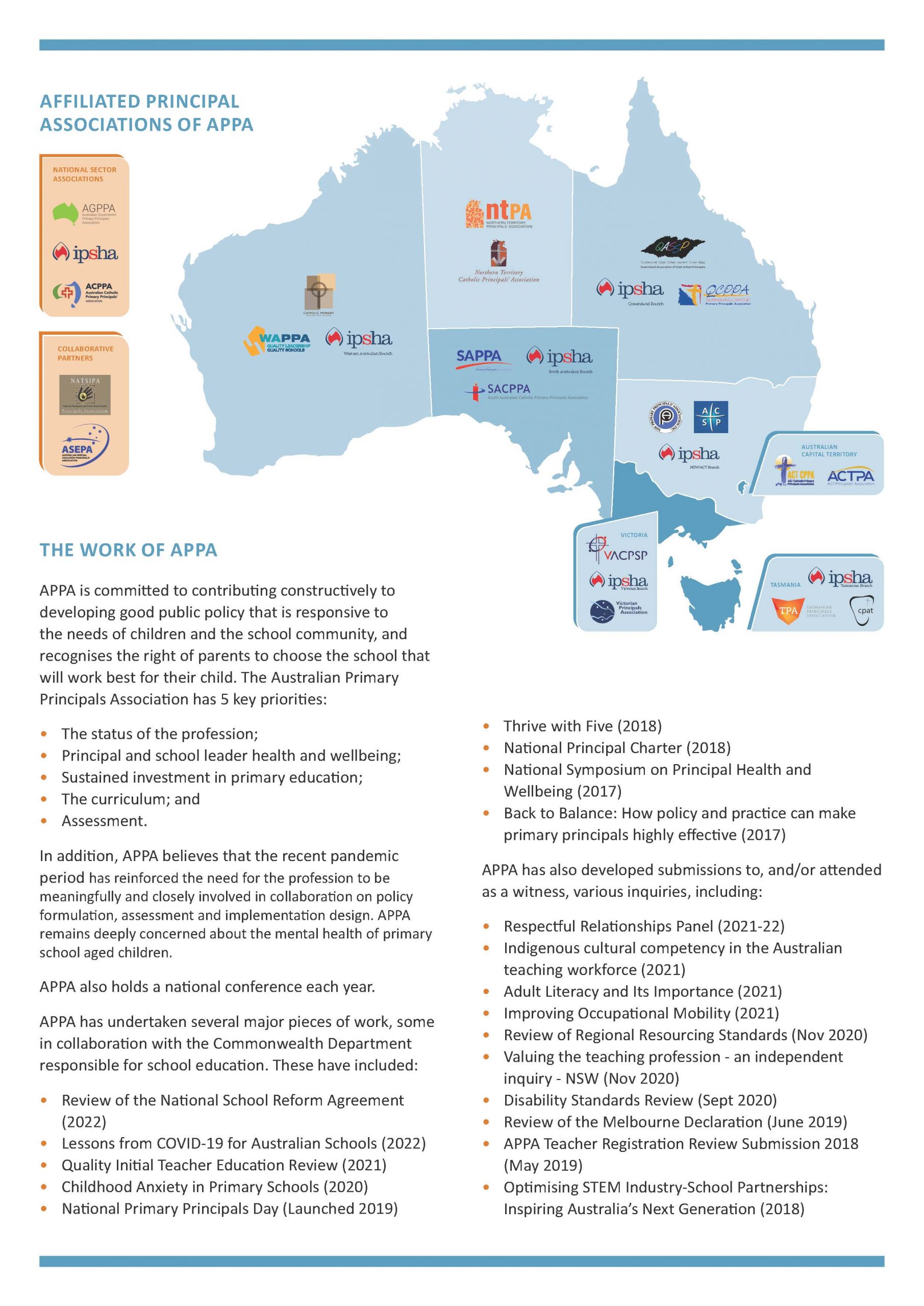 The Charter on Primary Schooling

The Charter on Primary Schooling

In our school communities, each child’s identity and culture is celebrated; personal responsibility is encouraged and expected; and knowledge and skills are gained for independent and lifelong learning.

Primary schools teach our children and contribute to our nation’s future.

They embrace the responsibility of helping children build strong learning and life foundations, enabling them to lead fulfilled and enriched lives. 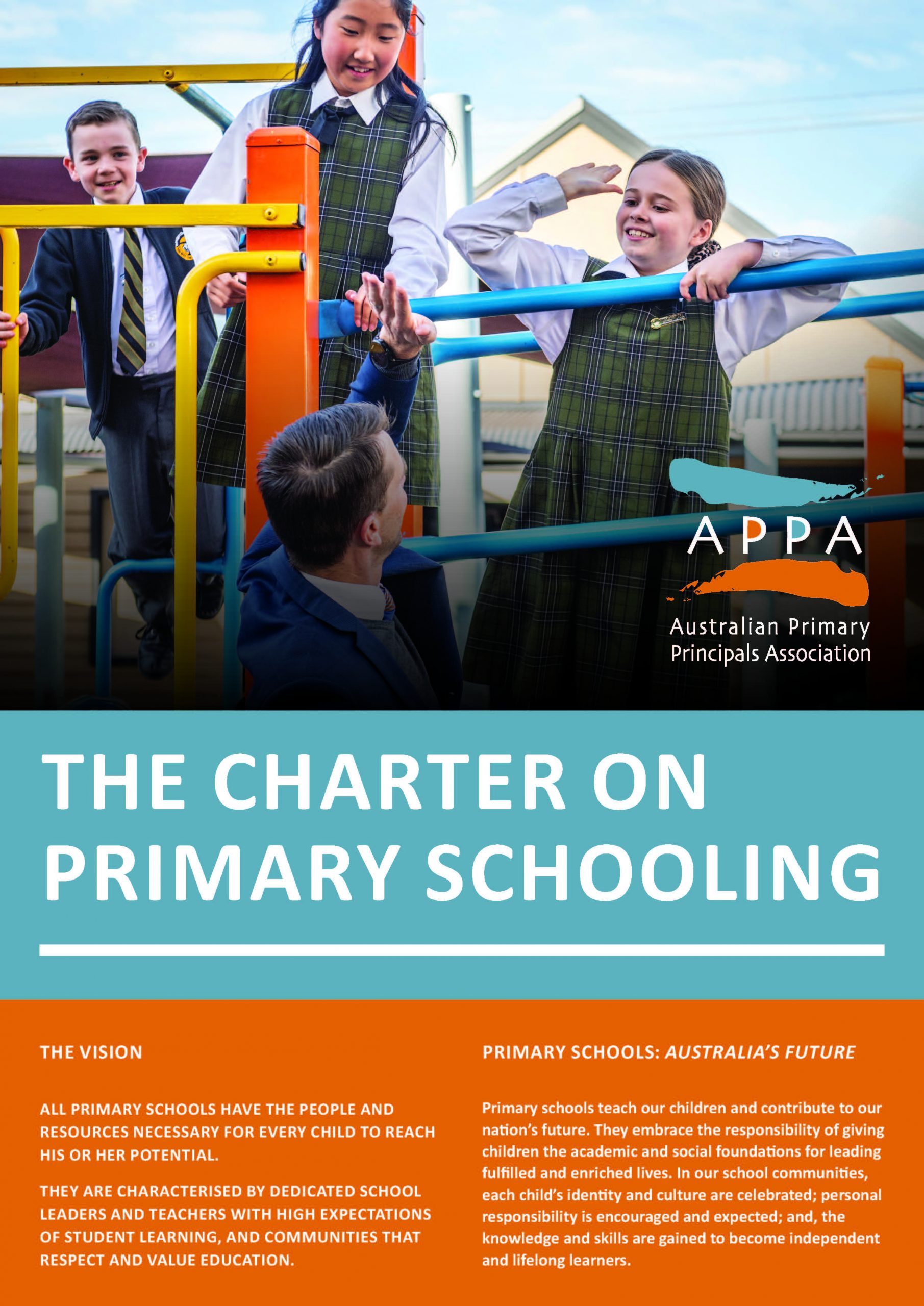 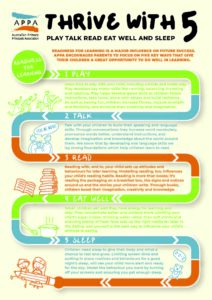 Readiness for learning is a major influence on future success.

APPA encourages parents to focus on five key ways that give their children a great opportunity to do well in learning.